Robert Plumb design, build and supply high quality outdoor furniture, architectural hardware and garden accessories and operates out of a showroom and workshop in Sydney that distributes and delivers its product nationally.

In the past, Robert Plumb hasn’t invested in consumer marketing, relying on word of mouth and therefore have low brand awareness as a retailer.

Until this campaign Robert Plumb has traditionally used “sales” several times in the year to help reduce stock, drive positive cash flow and introduce new customers to the brand. This “Multiple” Sales strategy if continued was in danger of eroding the brand’s premium positioning and ability to maintain a premium price. Traditionally annual revenue sees seasonal fluctuations with a slump in sales over the cooler winter months.

Senior Consultant Jo Bennett recommended that Robert Plumb wait until the summer season was almost over, leveraging the slow slide into autumn as a catalyst to encourage people to think about the following summer and to plan and act in advance. The strategy was to focus on a single one off opportunity – a “farewell” to summer sale over a two-week period with an integrated campaign.  High quality, professional imagery was integrated into every communication channel. Social media was leveraged heavily, but was strategically supported by bought media (print and online), posts and direct mail to a loyal base of owners and advocates.

We agreed a pricing strategy that was a set discount of 25% on the entire product range, rather than a first come, best deal approach. This gave the sale authority and ensured that interest remained strong over the entire two–week period. As an added bonus some floor stock was discounted by up to 50%, which allowed us to use this enticing number in the messaging too.

The Robert Plumb database of 3’600 is made up of loyal clients and advocates.  Consistent creative was used throughout the email campaign, with clear messaging and calls to action.

The first email was sent on the first day of the sale, informing clients of an exclusive pre sale period to make them aware of the sales and its offer and to encourage recommendation and advocacy by word of mouth.

This initial email resulted in a 47.3% open rate and generated over 320 clicks to the Robert Plumb website.  There were over 30 phone enquiries over the next few days and this email alone generated $85’000 in revenue in just two days.

A further email was sent on 10th March with reinforced messaging, with only five days of the sale remaining and calls to action. This second eDM resulted in a 39.8% open rate and a further 160 clicks to the website.

Robert Plumb has a growing following of advocates on Instagram who are primarily interior designers, architects and industry influencers. Generally engagement is low when posts are overly promotional so we posted a minimal number of images with the sale creative, instead opting for product images using the text with key sale messages.

For Facebook we used posts and a paid advertising campaign, which lasted for the entire period of the sale.  Advertising was highly targeted by location, age, gender and interests, to homeowners in affluent suburbs of Sydney.

Consistent graphics were used on all posts with the “Sale Circle” and calls to actions used on all paid posts. During the Facebook campaign we posted a series of regular unpaid posts showcasing product to create awareness of the range of Robert Plumb products.

The Facebook advertising budget was limited to $700 for the campaign, which was allocated daily with the most expenditure over the last five days. 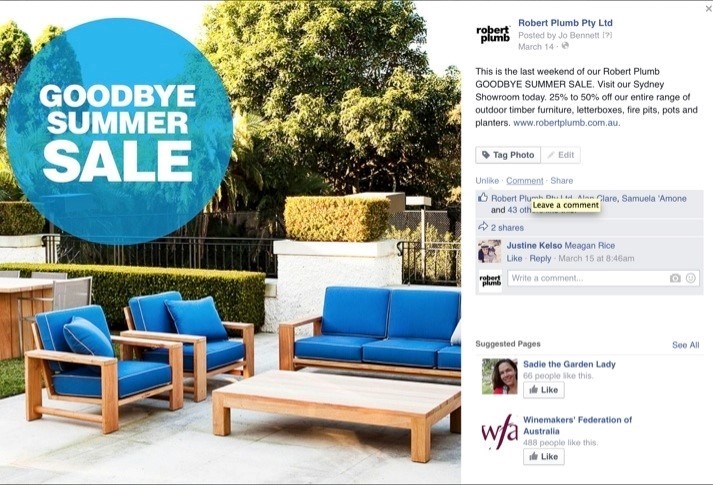 With a limited budget of $20’000 to spend on print advertising, which was to include the media agency fee, we negotiated with the Telegraph and The Sydney Morning Herald to run a total of five advertisements in publications that were widely read by the target demographic. The publications and placements that we chose are the “go to” sections for high-end furniture sales and included:

The creative for the advertisements used the same consistent graphics that we used throughout the campaign with strong messaging that was impactful and clear. For the second and last weekend of the sale the date in the graphic was changed to the wording FINAL WEEKEND to ensure that our target market were aware of the end date.

With a limited budget for online marketing we identified a number of online sites that gave us high exposure for a minimal cost. These included Missy Confidential where we bought a newsletter inclusion, a tile on homepage carousel and dedicated Facebook posts.

The creative for the listings used the same consistent graphics that we used throughout the campaign with strong messaging that was impactful and clear. 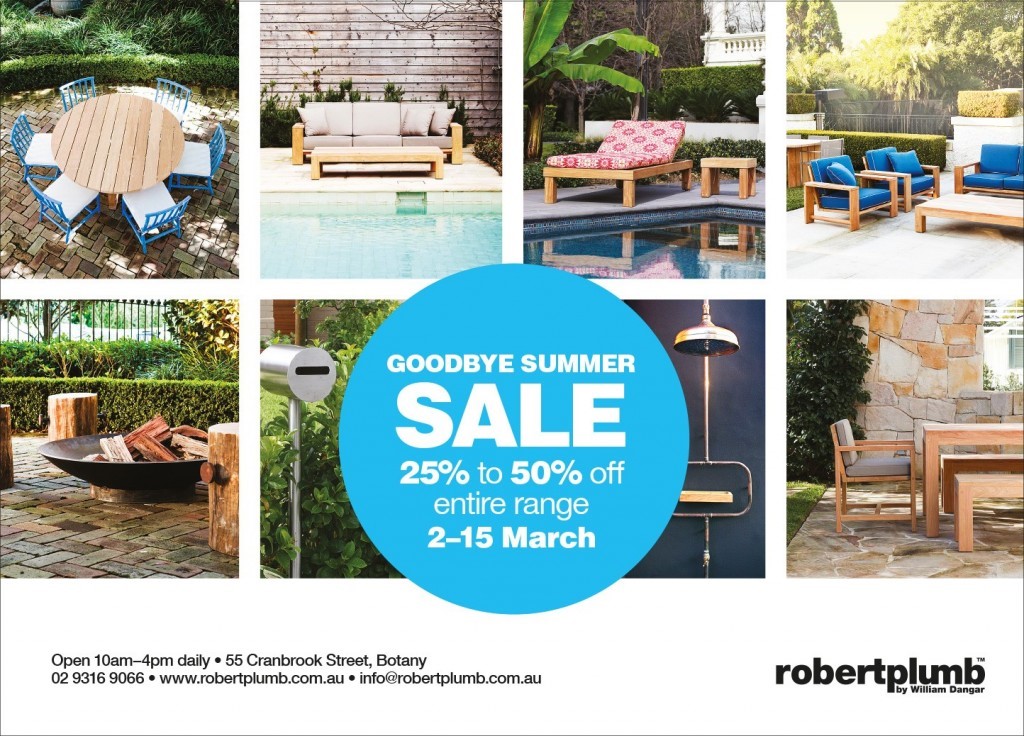 We recognized that earned media was an essential element of the campaign and sent two press releases to relevant media, lifestyle bloggers and partners. Being a sale, the topic was not immensely newsworthy but despite this challenge we received coverage from lifestyle bloggers and the editor of The Sydney Morning Herald, Source who tweeted the sale in the lead up days. Distributors were notified via email and they posted on social media, as did interior designers and other advocates of Robert Plumb.

The results of the campaign exceeded the planned outcomes with sale revenue significantly higher than anticipated. Highlight in terms of results were:

Total SALE revenue generated within a two week period was over 15 times  the total marketing costs.

What the client says:

Marketing Angels consultant Jo Bennett has been engaged by Robert Plumb since October 2014, developing and evolving its brand and positioning, and managing all aspects of marketing including advertising, PR, online and social media, event communications, collateral and channel communications.

“Jo is an important member of our senior management team and we rely on her strategic direction in all areas of marketing. Prior to her engagement we lacked a clear strategy and approach to marketing and Jo has provided valuable strategic advice. Jo has given direction and implemented marketing solutions which include a website refresh, email marketing campaign, social media campaigns and PR and content creation. Jo’s passion, enthusiasm and professionalism ensure quality marketing outcomes and we are proud to have her working with our team to ensure successful outcomes for Robert Plumb.”

Find out more about Robert Plumb.

“Wow, theres a lot to do when organising an event. We’re grateful that we had Marketing Angels to assist us. They knew the right mix of people to invite”